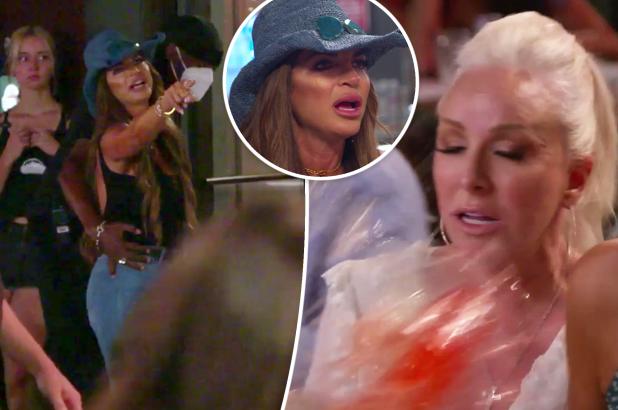 Margaret Josephs claims that producers of “The Real Housewives of New Jersey” asked Teresa Giudice to leave the cast’s vacation rental after the latter star’s Nashville outburst, which aired on this week’s episode.

The Bravolebrity continued, “feeling is to intimidate, dominate and humiliate. That’s the way she bites, but that doesn’t work with someone like me.”

Josephs went on to say that she believes Giudice’s fiancé, Luis “Louie” Ruelas, was “upset” by his future wife’s behavior in Music City. The “New Jersey” OG lobbed dinnerware at Josephs after accusing the Macbeth Collection designer of of leaking information about Ruelas, 46, to “bloggers.”

“Everybody was in shock. It was like blind rage on her part. I think [Louie] didn’t even know what to say or do. I don’t think he ever saw that side of her. It was, you know, it was it was mayhem,” she said, adding elsewhere, “I think it upset him truthfully, I think it upset him.”

Over the course of several episodes, Giudice, 49, has tried to pin negative press about Ruelas on Josephs — but Josephs has vehemently denied claims that she is behind the headlines.

Page Six exclusively reported in April 2021 that Ruelas’ ex-fiancée Vanessa Reiser filed legal action against him when their relationship ended in 2020, alleging that he would become angry if they didn’t have sex on his schedule. The lawsuit was eventually settled out of court for undisclosed terms.

That same month, a police report obtained by Page Six revealed that Ruelas was charged with simple assault following a road rage incident in August 2018.

“Every time we do have a major talk, something comes out and then who brings it out?” Giudice shouted on this week’s installment of “RHONJ.” “Miss Margaret does!”

Josephs then calmly called Giudice a “sick, disgusting liar,” which infuriated the infamous table flipper, prompting her to toss plates, utensils and full cocktails at her onscreen nemesis.

Later, Giudice threatened to “beat the f—king crap” out of Josephs, whom she also branded a “bitch” and a “c—t.”

When the cast — also including Jennifer Aydin, Jackie Goldschneider, Dolores Catania and Melissa Gorga — eventually returned to their rental house, Giudice and Ruelas departed in pajamas, giving viewers the idea that the couple left on their own terms.

“That’s not what happened,” Josephs claimed to host Kate Casey.

Bravo did not immediately respond to Page Six’s request for comment.

“The Real Housewives of New Jersey” airs Tuesdays at 8 p.m. ET on Bravo.

Tory Lanez Claims His Bald Spot Is Due To Alopecia (Video)